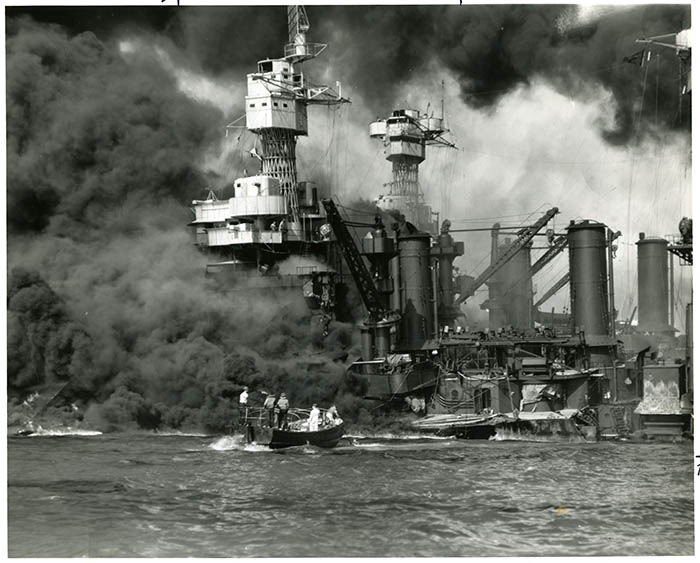 Crew rescuing men of the USS West Virginia during the attack on Pearl Harbor, December 7, 1941.

On December 7, 1941, Austin “Don” Cunningham, United States Navy Seaman 1st Class from Harrison County, West Virginia, was looking forward to a leisurely Sunday morning aboard ship. Suddenly, he heard a tremendous thud and “Boy, everything broke loose!” The first of seven torpedoes and two bombs had struck his vessel, the USS West Virginia.

Moored on Battleship Row in Pearl Harbor, Hawaii, beside the USS Tennessee, the West Virginia was the first ship hit by the attacking Japanese warplanes. Cunningham and the rest of the crew rushed to man their battle stations amidst the heavy barrage of torpedo strikes, strafing, raging fires, oily smoke and water. Many men found their assigned positions were unreachable or demolished and turned their efforts to rescuing the wounded in the hellish conditions.

Within minutes the West Virginia was severely listing to port. Alert junior officers immediately started to counter flood compartments below, an action which had the unfortunate consequence of trapping numerous members of the crew. But the balancing strategy worked, preventing the ship from fatally capsizing, and instead of “turning turtle,” the USS West Virginia sank forty feet to the floor of the harbor on an even keel. Only the top deck and caged masts remained above the water line. 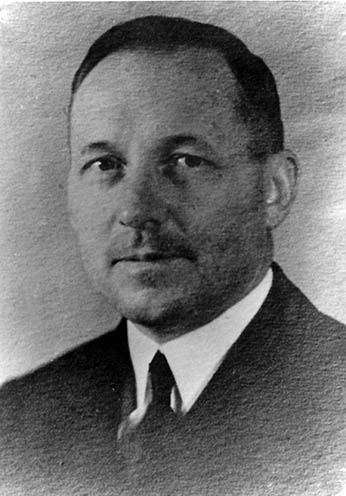 Commanding officer Captain Mervyn Bennion was mortally wounded on the command deck while directing his crew’s actions to defend the ship. Refusing to be taken off the burning vessel, Bennion was moved to a less exposed area where he continued issuing orders. His last order to his men was to abandon ship and leave him behind. Captain Bennion was posthumously awarded the Congressional Medal of Honor for his “extraordinary courage and complete disregard of his own life above and beyond the call of duty.”

One of the crew members who helped carry Captain Bennion to cover was Mess Attendant 2nd Class Doris “Dorie” Miller, a 22-year-old African-American from Waco, Texas. After finding his battle station destroyed, Miller was assigned to the bridge to assist in moving the dying captain. Miller was next ordered to help mount and load anti-aircraft machine guns. Despite his lack of gunnery training, Miller manned one of the weapons and shot at the oncoming enemy planes “as if he had fired one all his life.” When his ammunition was spent, Miller shifted back into rescue mode, pulling wounded sailors from the fiery, oil-covered water up to the quarter deck. For his courageous actions without regard to his own life, Miller was awarded the Navy Cross, becoming the first African-American to earn that high honor. 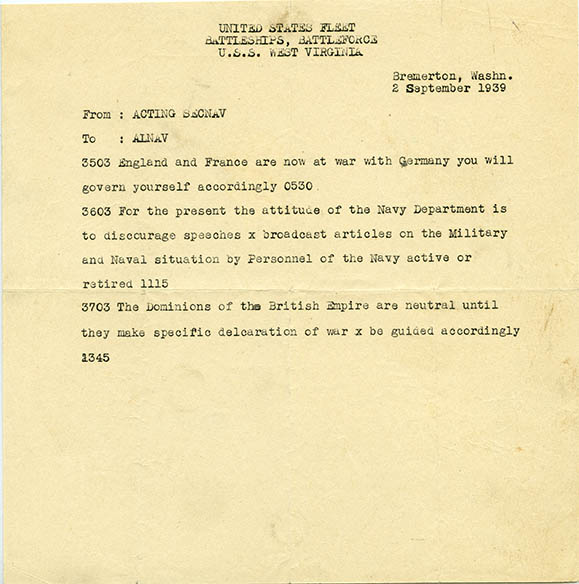 Communication reporting that England and France are at war with Germany and instructing navy personnel to “govern themselves accordingly,” September 2, 1939. 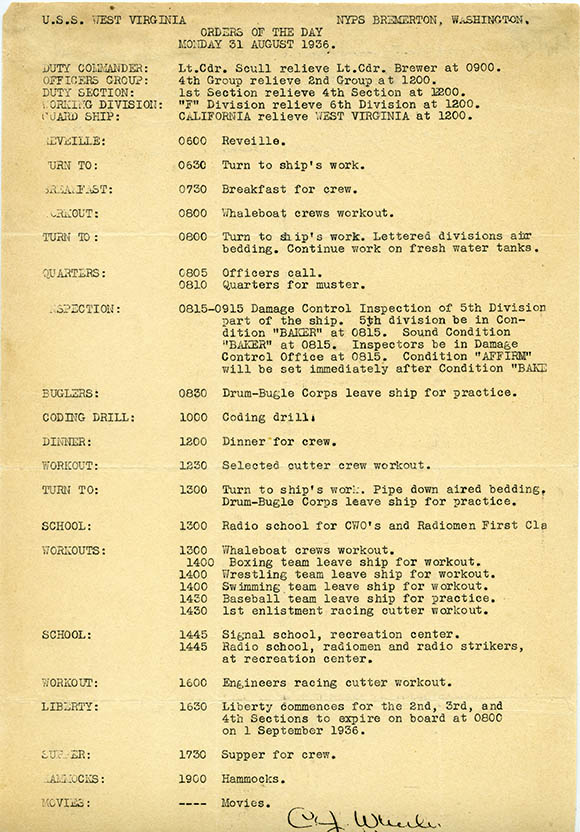 By the time the second wave of the attack had ended, the keel of the “Mountaineer Battlewagon” sat at the bottom of the harbor, a fate few could have imagined for the 20 year old vessel. The last battleship to be built before World War II, the USS West Virginia was launched at Newport News, Virginia in 1921. She was then outfitted and commissioned in 1923, taking her place as a prominent member of the United States Battle Fleet. Affectionately called the Wee Vee, she took part in every naval exercise and won several prizes for gunnery and overall efficiency in the ensuing years. She served more than once as the fleet’s flagship. 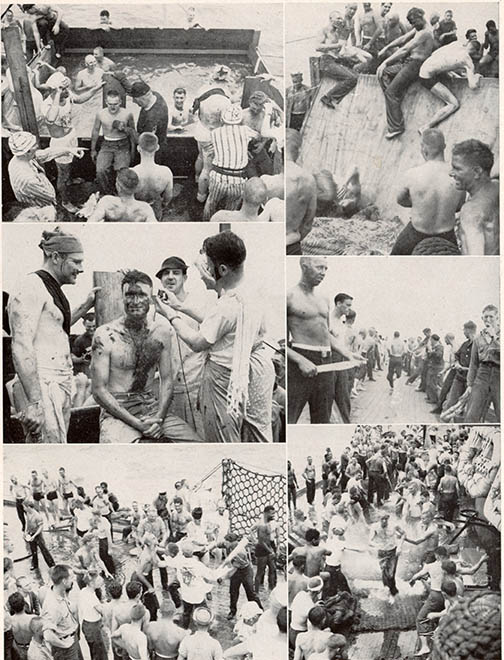 Scenes from a “crossing the line” initiation ceremony.

Prior to December 7, 1941, life onboard ship was regimented and stern but there was lighthearted entertainment, athletic competitions, holiday celebrations and a ship newspaper aptly titled, The Mountaineer. One of the most notorious activities was the 400-year-old naval tradition of “initiating” crew members “crossing the line” (the equator) for the first time, a rite of passage through which a sailor was transformed from Pollywog to a “trusty” Shellback, an official son of King Neptune. The Pollywogs were ordered to put on a talent show to entertain the Shellbacks who donned costumes representing King Neptune and his court, including Davy Jones and Peg Leg, among others. In return for their efforts the Pollywogs were served with subpoenas from Davy Jones to answer charges brought against them such as, “fading too much Shellback cabbage in crap games,” “trying to consume beer faster than it could be made,” and for complaining about or, even worse, complimenting Navy chow. When found guilty, a hazing ritual ensued whereby bodies were “paddled into shape” and “decorative grooming” was applied. After kissing the belly of the royal baby (coated with grease and other tasty substances), navigating an obstacle course, and a dip in the salt water, the Pollywogs were declared Shellbacks and presented with certificates initiating them “into the solemn mysteries of the ancient order of the deep.” This time-honored ritual was deemed to strengthen camaraderie among the crew and thus practiced on U.S. Navy vessels throughout the war. 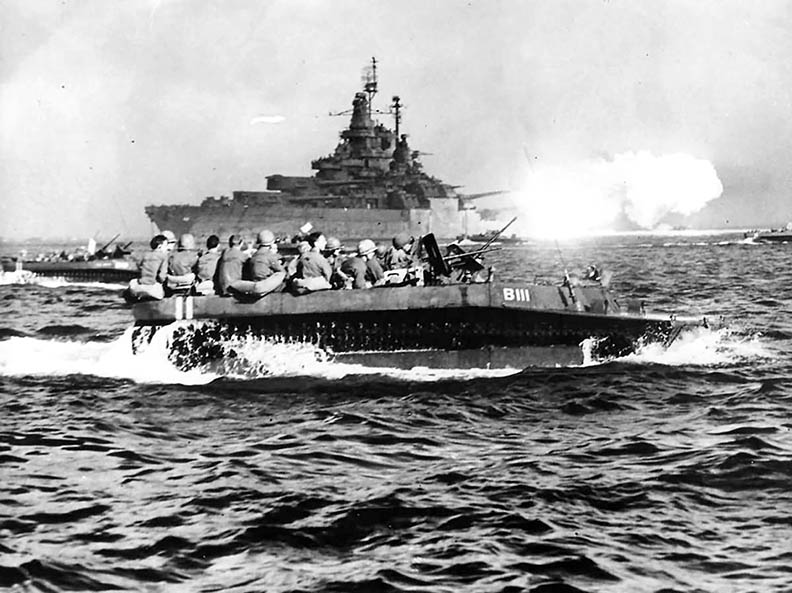 Casual life aboard ship abruptly ceased with the Japanese attack on Pearl Harbor. For over two weeks after the battle, a constant rhythmic banging was heard emanating from the bow of the West Virginia, buried deep in the waters of the harbor. Marine Corps crew member Dick Fiske recalled, “It didn’t take long to realize that men were making that noise. Pretty soon nobody wanted to do guard duty, especially at night when it was quiet. It didn’t stop until Christmas Eve.” Finally, in May of 1942, the West Virginia reached the top of the salvage priority list and was raised for repair. During the search of the vessel’s lower decks, the bodies of 66 sailors were found. Among them were the huddled bodies of three sailors -- Clifford Olds, Buddy Costin, and Ronald Endicott – discovered in the forward compartment of the bow. Lying beside them was a marked calendar. The last day marked off was December 23, 1941.

After extensive repairs, refitting, and modernization at the Puget Sound Navy Yard in Bremerton, Washington, the USS West Virginia rejoined the U.S. fleet in 1944. The Wee Vee participated in several major engagements against the Japanese stronghold in the Pacific Theater including the battles of Leyte Gulf, Iwo Jima, and Okinawa. During the battle of Okinawa, the ship received another major wound from a Kamikaze attack which killed four crew members. She was patched up and returned to battle once again, dubbed with the sobriquet, “The Phoenix of Pearl Harbor.”

On August 31, 1945, the USS West Virginia sailed into Tokyo Bay. She was present at the formal surrender of Japan to the Allied forces two days later, the only ship to witness both Japan’s first attack and Japan’s surrender.

The USS West Virginia was deactivated in 1946 and decommissioned the following year. A decade later the vessel was sent to the Todd Shipyard in Washington to be scrapped. Through the herculean efforts of the WVU student body and Morgantown Junior Chamber of Commerce, funds were raised to save the mast of the stalwart Wee Vee and to provide it a permanent home on the campus of West Virginia University. Transported across the nation to the Mountain State free of charge by the B&O Railroad, the mast arrived in Morgantown in 1961. It was installed and dedicated two years later on Memorial Plaza in front of Oglebay Hall where it remains today as a monument to the USS West Virginia, “her gallant crew, and all West Virginians who have served our country in the Armed Forces.” 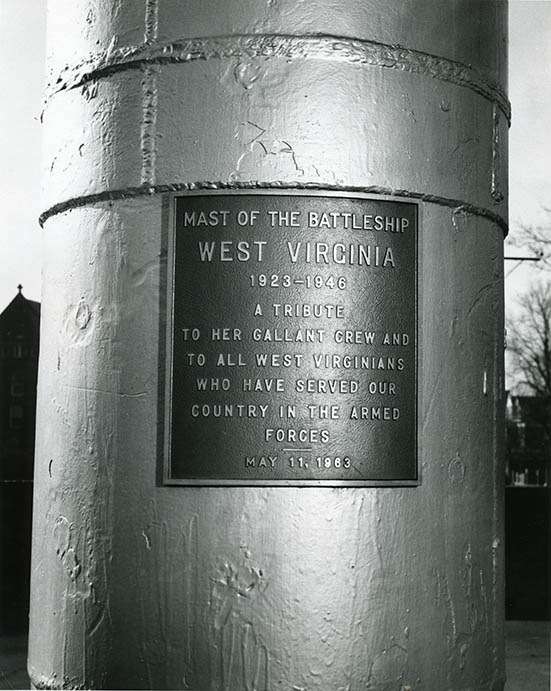